Someone told me this was International Cosplay Day…

So it’s only appropriate that I spend most of the day working on the beginnings of my Halloween Costume.   I am a terrible procrastinator, and if I wait until the last minute it will never come together, so I’m starting now.  So costume party on Halloween, need something to wear.  Now the party I am going to is going to be attended by what one might call …  mundanes.  muggles.  ahem.  normal people.   So I wanted a costume that could serve me later at nerdier functions – but I didn’t have to explain who I was to everyone.  So at some point, I decided to do a steampunk Joker.   Now I realize I may have to explain “steampunk”  but at least with the green wig and the unmistakable makeup, everybody would know I was the Joker.  And with that the costuming began. 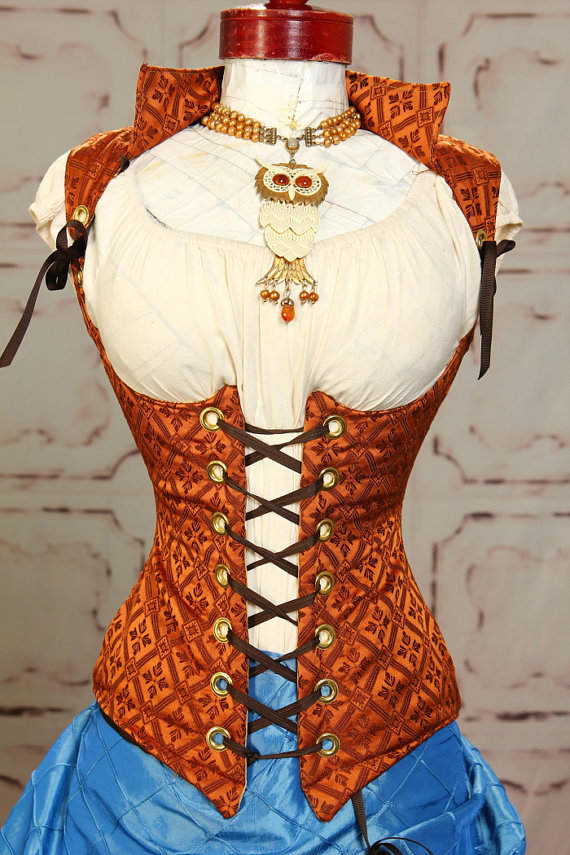 So I bought this corset.   Made by Damsel in this Dress, this is their Vixen model.  I bought it because I basically thought it was versatile for all my pirate / steampunk / renfest costuming needs.  And it is orange.  I haven’t really decided what I’m going to wear underneath – right now what I’m leaning towards is a turquoise button down.

I found this green wig on ebay for about 10 bucks.  I’m glad I ordered it early because apparently it’s coming from Japan and will probably take forever.   It will probably be really gross and super cheap, but I like the color, and in the picture it doesn’t look too bad, right?

I also ordered a pair of welding goggles ( steampunk, remember? ) off ebay, and they arrived this morning in the mail.  So I got to work modifying them, and in about a half hour, with some rub n buff and a sheet of iridescent cellophane I had this:

I’m pretty pleased with the outcome!  I’ll probably do the Lug’s tonight – he’s going to be Dr. Horrible.

My next bit of alteration were of a pair of 6 dollar oxfords I picked up from Goodwill this morning.  They were just plain black, so I had to Jokerize them.  They are kind of a little bit more Rockabilly than Steampunk, but whatever – I think they look awesome.

Other Goodwill finds included a great purple pair of slacks that just need to be hemmed, and a jacket I may dye and chop up a bit.   I was disappointed in the lack of good belts, but I will keep my eye out for more in the days leading up to halloween.  What I still need:   I want a holster and a bang flag gun I think, but those flag guns really don’t look like real guns – so I don’t know.   More belts so I can make strappy harnessy stuff.  And if I feel really creative, I may want a steampunky squirting flower.  That may be too complicated though, but we will see.

Posted in Completely Off Topic, Odds and Ends, Work in Progress. Bookmark the permalink. RSS feed for this post. Leave a trackback.